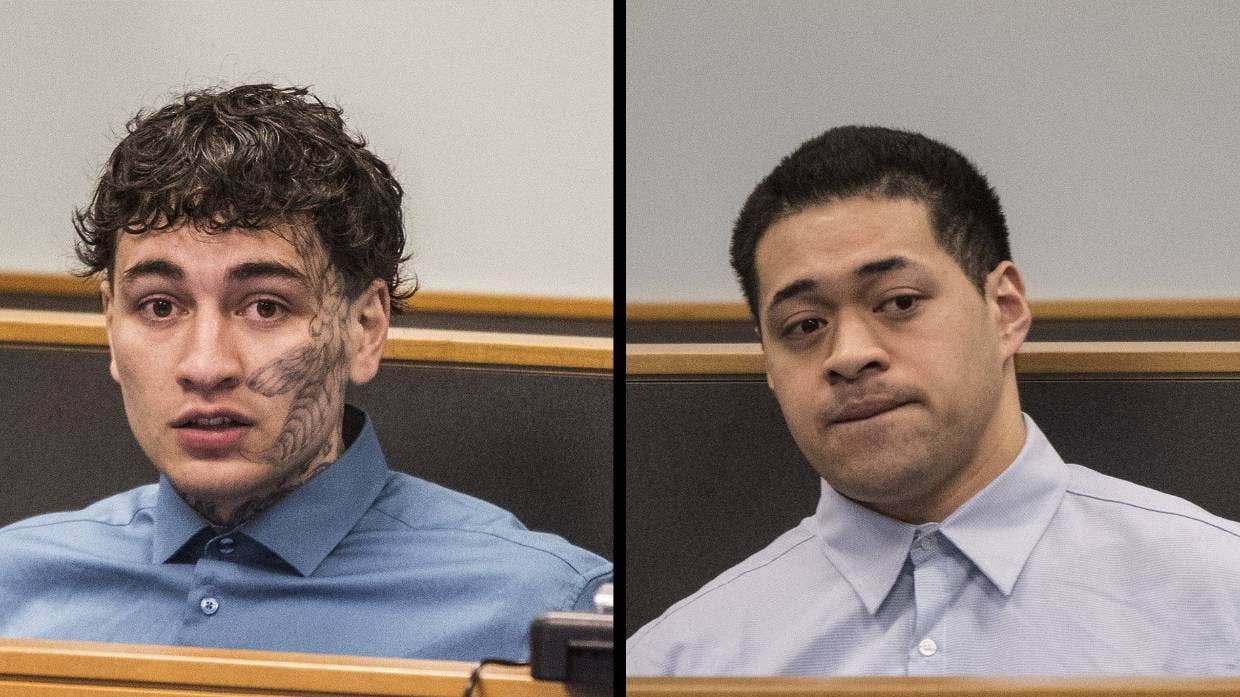 Two prisoners who took part in an assault inside the country’s only maximum security prison have had time added to their sentences.

The judge noted the jury verdicts showed they believed the attack on Su’a was a “separate event” and he would pass sentence accordingly.

CCTV of the attack in March 2020, inside an exercise yard, showed prisoner Lopeti Telefoni drop Lee with a single punch before a fourth prisoner, Siuaki Lisiate, repeatedly stomped on Lee’s head and stabbed him with a shank.

At trial, the Crown’s case was that Telefoni, Ngamoki and Tuliloa then went after Lee’s friend, Cesar Su’a, to prevent Su’a from helping Lee.

But lawyers for the trio said their clients never planned to kill Lee and had no idea Lisiate was armed with a shank.

Justice Moore said the pair kicked Su’a in the head while he was on the ground and that Su’a was outnumbered.

Six months after the attack on Su’a, Ngamoki punched a Corrections officer in the head as he was being taken to his cell. Justice Moore added time to his sentence for that assault. Both also had time added for their previous convictions.

The judge gave discounts for the early guilty pleas. For Ngamoki, the judge provided further discounts after receiving a cultural report that showed he had suffered systemic depravation, including growing up around violence and anti-social role models.

Justice Moore provided a further discount for his prospects at rehabilitation, noting Ngamoki hopes to move to Dunedin and open a barber shop.

The pair have extensive criminal histories.

Ngamoki was just 16 years old when he and two others forced a man at gunpoint to drive them from Palmerston North to Whanganui in March 2017.

Court documents show Ngamoki and the others then robbed a petrol station before he and another forced the man to drive them to Wellington, and later, Palmerston North. The man managed to escape after raising the alarm at a fast food restaurant.

Following his arrest, Ngamoki was sent to a Youth Justice Facility in Rotorua.

In another incident, Ngamoki and a friend escaped from the facility and attacked two men in a car. They said they had a gun and demanded phones, eftpos cards and pin numbers.

Ngamoki and his friend drove to Whanganui and put both men in the boot of the car.

“You have got ability, you have got talents, and doors could open for you during that sentence which could change your life for the good when you get your release. The choice is yours.”

Tuliloa is a 22 year-old convicted sex offender and authorities want strict conditions imposed on him when he is eventually released from prison.

According to court documents, he has eight convictions for violence, four of which are of a sexual nature.

He has convictions for breaking into a young woman’s home and touching her as she slept. On another occasion he broke into a woman’s house and found her in bed with her partner.

Despite undergoing a sex offender’s programme, at age 17, Tuliloa was high on cannabis and synthetics when he broke into the home of a 57-year-old woman and forced her to do a sex act and raped her.

Afterwards he demanded money and stole items from her home. He was convicted of burglary, unlawful sexual connection and rape

While in prison he was placed in another sex offender’s programme but removed after showing “aggressive behaviour”.

During his various sentences he has been the subject of 33 incident reports and 18 misconduct reports, including fighting with other prisoners, possessing a cell phone and unauthorised prescription medicine.

Justice Hinton said Tuliloa showed a lack of remorse for his offending and had a high risk of reoffending within weeks or months of being released from prison, unless monitored.

At a subsequent hearing in June, Justice Pheroze Jagose ordered Tuliloa be subjected to a 10 year extended supervision order.

Lopeti Telefoni was found not guilty of murdering Blake Lee, but guilty of manslaughter. He and Lisiate are due to be sentenced in December.

Lisiate, who pleaded guilty to murdering Lee, faces the prospect of becoming the second person to be sentenced to life without the possibility of parole, following the Christchurch terror attack.